Thank you for taking a few minutes to read what we thought were some exceptional collections and archive editions from 2022. We'd be remiss if we didn't issue the standard boilerplate caveats that this list is by no means conclusive or comprehensive. We choose the term "favorite" for specific reasons as the books that comprise this list rank highest in our own personal regard based on what we've read this year. By no means have we read everything, and by no means do we mean to offer any commentary by means of exclusion.

This is one of a few books I was able to read this year that I desperately wanted to write about but never was able to get exactly what I wanted to say onto paper. And there really is so much to say about this collection. You can't help but stand in awe of Charles Johnson, and if you aren't incredibly familiar with his cartooning (as I was not, myself), this collection will serve to offer another layer of the genius of a man who is an accomplished author and academic scholar. What impresses me most about Johnson's work compiled in this collection - mostly cartoons from prior to when he achieved literary fame - is the way he subverts the typical style of the single-panel political cartoon - think radical politics by way of a New Yorker cartoon. The juxtaposition of perspectives and the poignancy of Johnson's gags amount to a masterclass of political cartooning. Johnson's commentary is searing, and it's almost tempting to say he was ahead of his time with his philosophy. In reality, it's more of a reminder of how little progress we've made. (mmc)

Here’s hoping that this book, written by Brett Lewis, gets a nice, deluxe collection sometime because it’s a really great story. But this book is a labor of love by Scott Dunbier and Leon’s studiomates Tommy Lee Edward and Bernard Chang, scanning John Paul Leon’s great original artwork from this series.  I’ve got a handful of the big Artist's Editions and even more of the Artisan’s Editions (hidden gems that reprint the hardcovers in a smaller, more affordable, paperback version) and the best ones are where you can see the work happening on the pages.  In some of the editions, the artwork seems so perfect like all they are is just a black & white reprint of the comic.  But in this Winter Men edition, you can still see Leon working through the storytelling and the drawing, where to fill in all of the details and where to pull back because the reader can fill in the blanks.  It’s a great testament to Leon’s artwork and a reminder of just how fantastic he was. (sc)

I read this at a point I thought I could actually keep with a new job and a new website, and I'm hopelessly remiss that I never had the chance to truly get my thoughts about this compilation down on paper. Kudos to the New York Review Comics team, a publishing house that continually produces some of the finest-looking books, for putting out this collection in such a beautiful package. Seth's book design provides a modern context, if not elevation, coupled with Jeet Heer's analytical foreword. Both Elephant and The Projector are the types of comics that - barring a few dated elements of reference - feel like they could be made five weeks ago, let alone fifty years. Both eschew narrative in favor of form, Elephant more so, and each page is essentially an exercise in piecing it all together, both what is on the page and what is left off. Situationist and dadaist, this is the type of book that, being rediscovered, feels like a lost piece of a puzzle. Its history does not preclude its contemporary vitality. (mmc)

Pulp Power: The Shadow, Doc Savage, and the Art of the Street & Smith Universe by Neil McGinness, published by Abrams

Abrams has the best design of any publisher working in the world of comics today. And I know that pulp isn't exactly comics per se, but there is a clear trajectory from pulp art to golden and silver age superheroes. So, yes, this book is somewhat comic adjacent, as pulps tend to be to comics in general. It’s hard to say the spirit of pulps disappeared, inasmuch as their overall motifs and tropes seemed to find a better home in the comic world than in prose. What McGinnes is able to do in this stunning oversize edition is to trace the impact pulps had on pop culture and the next generation of creators who entered comics inspired by the stories as much as the covers and art pages of pulp magazines. This is the kind of book that is fun to have around not necessarily to read from cover to cover, but to leaf through every so often to experience little details. Books like this often get obsolesced by the internet, but there is something special about it being put together in one package, both as a reference and a symbol. (mmc)

I wrote about this compendium when it first arrived on shelves, and I’m still in awe of it sitting next to my turntable (it doesn’t fit on any of my shelves. I need bigger shelves). Simpsons Comics captured a sweet spot of fandom, and the Treehouse of Horror collection is a love letter to the seemingly extinct series. What sets this apart from any regular collection is the beautiful production value of this tome. Treehouse of Horror arrives with a glow-in-the-dark cover featuring brand-new art, encased in a sturdy slipcase that connotes a special prominence for the series. The book is slightly oversize. And it’s heavy - weighty paper and a solid cover. It is an absolutely elegant edition of, yes, Simpsons Halloween comics. It’s perfect. (mmc)

Love and Rockets: The First Fifty by Gilbert Hernandez, Jaime Hernandez, and Mario Hernandez and The Complete Eightball by Daniel Clowes, both published by Fantagraphics Books

This isn’t the first time that Fantagraphics has done collections like this, and it’s not even the first time that they’ve published The Complete Eightball as this is a softcover collection of the work previously released in hardcover but I greatly enjoy these collections that present whole issues.  Even though I really enjoy a lot of Clowes’ work, the early stuff in this collection is a huge blindspot to me.  I’ve never read Dan Pussey and even though I own two copies of Like A Velvet Glove Cast In Iron (don’t ask,) it’s another book that I’ve just never found the time for.

And the act of reading these books is just do different from regular collections.  I’ve got and read multiple versions of the early L&R stuff but the early stuff like Jaime’s Mechanics always felt like it was just that- early work– that you had to wade through to get to the good stuff.  But reading Love and Rockets #2, Maggie’s story took on a new life.  I was able to read it by itself, not just to get to more Maggie & Hopey stuff but as its own thing and it was fantastic.  You almost forget just what the single issue experience is like so I’m grateful to Fantagraphics for putting out these great collections and reminding us just how fun it is. (sc)

After I finished Dirty Pictures, I realized that anyone interested in the trajectory of American comics needs to read both Dirty Pictures and American Comics to get the full picture. The more I consider each book, the more I realize simultaneously how far comics and comix have come since their iteration (or even their proto-formats) while still being fundamentally connected to the same core concept that helped them emerge in the first place. It’s rare that we get this kind of analysis of comics, let alone twice in one year. (mmc)

It's the 75th anniversary of the Adventure Capitalist, and Fantagraphics has provided us with two beautiful collected editions. If you've been following along with Fanta's Duck and Disney archival editions, it is no surprise that these books look and feel fantastic. The Diamond Jubilee collection, a treasure trove of Carl Barks classics, is a near-complete-omnibus of the best works of Scrooge's creator. Clocking in at over 300 pages, this is a gorgeous collection that lets the reader experience the sheer magnitude of Barks' creative output. Not to be outdone is the equally special collection of famous Bear Mountain tales. This collection marks the first time Fantagraphics has collected Duck comics under a general theme rather than a specific story or cartoonist. What I love about the Bear Mountain book is the ability to read through the legacy of Bark's creations passed down to Rosa, Branca, and Cavazzano. Both of these books are stellar editions to an already superb collection of Duck comics shepherded by Fantagraphics. (mmc)

Scott and Mike take a look at their favorite comics from 2022. 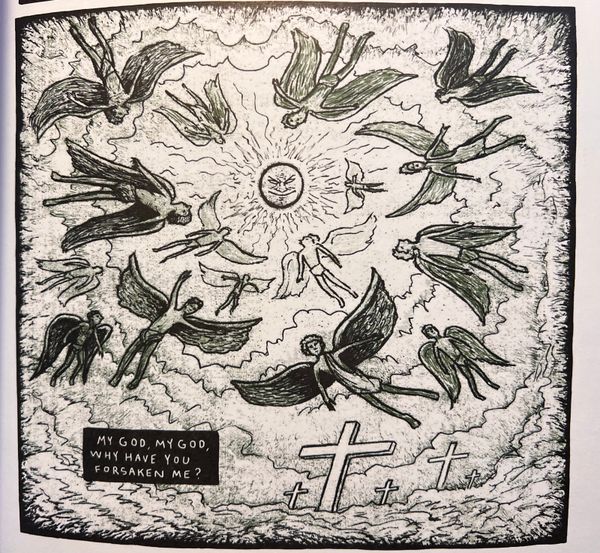 Casanova Frankenstein and Glenn Pearce map out the childhood trauma that forges the person we become, allowing us to accept the monster in us.