2022 sucks.  First Neal Adams. Then George Perez.  Now Tim Sale.  It's incredible how all three of them have drawn stories that are very important to me. It's just hard to imagine that we won't have any more art from these three titans.

So on that happy thought, let's dive into some of the pieces of writing about comics that jumped out at us this past week.

Yes, it's still over 2 months until Banned Books Week but we should always be thinking about how there are people out there who are always trying to find the next book to ban in their libraries.

For Popverse, Tiffany Babb argues that banned books are the books we should be encouraging and allowing our children to read.

... I challenge you to spend a day listening to how students talk. And wonder if it's better for children to see how that language is harmful or if it's better for them to learn how to perpetuate it without considering their impact (because they will). If you think a young person speaking about their depression and dark thoughts is going to be too heavy for your child, I'd ask you to talk to a child who is going through that right now, because you probably have one in your life.

And that wasn't all of the discussion this past week.  Heidi MacDonald spotlighted the librarians that are caught on the front line in defending these books for Publisher's Weekly.

It’s a frightening and exhausting atmosphere for librarians across the country, says Matthew Noe, lead collection and knowledge management librarian of Harvard Medical School’s Countway Library, who is wrapping up his second term as president of the GNCRT. “A lot of this stuff is sheer intimidation, and it’s mind boggling,” he adds. Noe feels that while the challenges were mounting all through last year, the phenomenon didn’t strike a chord in the mainstream news until Maus was removed from a school curriculum in Tennessee. “That seemed to be a wake-up call for a lot of people.”

Saying "Grant Morrison channeled John Lennon feels like the most 1990s thing I could write but here in 2022, Brian Hiatt interviews Morrison for Rolling Stone about their experience channeling Lennon as well as a whole lot more.

Utopian images of a future are few and far between; we’ve talked ourselves into a world where there is no future. So I think people still are clinging on to that last rope —  “who knows, maybe we’ll become superhuman, maybe we’ll get through this.” But the truth is, these images are very infantile, and the fear of the future is driving that return to the past. Everyone’s recycling stories and recycling characters that were at their best a long time ago. It’s emblematic of cultural stagnation. At the same time, I think it’s the last flicker of light in a lot of ways in mainstream popular culture, which is still trending towards the dark. But we need something new.

At Shelfdust, Steve Morris writes about the Connor Hawke story that appeared in DC's 2022 Pride special and found a thoughtful comic that addressed a character's asexuality.

... we get to read extracts from a letter he’s writing to his mother, explaining how he realised he was asexual. As I’ve experienced myself, he explains how the asexual spectrum basically feels like a blankness or absence; the idea that something isn’t there. As a result, it’s tricky to actually think “hey, I’m asexual” at all, because there’s.   always that nagging idea that asexuality isn’t actually a thing. Here, that doubt is turned into self-confidence, as Connor’s inability to be part of the crowd is precisely what allows him to defeat Music Meister.

Augie De Blieck Jr. uncovers a preview of a crossover that never happened– Todd McFarlane's Spawn and Neal Adams' Valeria the She Bat– and investigates how Neal Adams shifted plans when the crossover fell apart.

You can see most of the design changes Adams did to Spawn to create Knighthawk in this first page. As a Hybrid type of character, he takes on the characteristics of a hawk. The cape becomes more wing-like, complete with something closer to the way the end of a wing has individual feathers that look almost like fingers. The mask doesn’t cover the mouth area and the pattern around the eyes turns into a hawk silhouette. There is also, of course, a hawk logo on his chest now. The chains are gone.

There's a lot going on his this story and I feel like only De Bliek Jr. would have gone as deep as he did but it's an entertaining look at the crossover that wasn't and how Adams tried to salvage some of it.

Panter was now 70. If he had acquired wisdom, it must have seemed time to share it. And the “cosmic order” he hoped to “pass on” seemed to coalesce around installing a sense of one-ness. Man-with-Man. Man-with-Earth. Man-with-Cosmos. It appeared that, given present circumstances, the purpose of the oneness was to keep man from destroying his planet. If you wanted to save the planet, creating a comic book might not have been the first thing to come to mind, but, Goshkin would concede, adding one grain of sand to the dam against rising oceans could not hurt. And from the days of flower-power, Panter had mapped three paths away from raging fires, poisoned waters and acid-dripping skies: Meditation; LSD; and alien intervention.

It may not be today, and it may not be tomorrow, but the law of averages dictates that one of these days, Nate Garcia is just gonna take this whole thing too far. His comics about tennis-shoes-wearing cowboy Alanzo Sneak, his horse Sheena for whom he harbors an unhealthy longing and/or obsession, and their anthropomorphic dog pal Huff Deely have consistently straddled the fence between humorously cheesy and downright queasy (with generous side helpings of sleazy and uneasy for good measure), but he’s got this uncanny ability to take you right to the edge and then reel you — and his characters — back in.

For Women Write About Comics, Masha Zhdanova interviews Alec Longstreth about this work, including his current webcomic Isle of Elsi.

Sometimes writers talk about their “internal age.” I feel like I’m about nine, which is the age of the main character, Rex, so he’s sort of a stand-in for me. It’s just looking for any little part where I can make it more interesting. I have a scene where the adults are having a meeting and it’s like, well what if one character falls asleep and their snoring sound balloon gets bigger and bigger and bigger and then someone pokes him and wakes him up and he goes “HUH?” So it’s a running gag going in the background while normal comics stuff is going on on the surface level. I try for visual gags and verbal humor in every story no matter what else is going on

💡
Want more pieces like this in your email? Subscribe and get From Cover To Cover delivered right to your inbox. 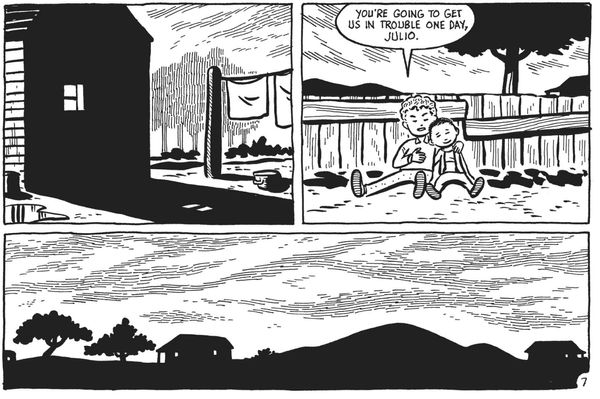 A simple life doesn’t necessarily equal a life that is simple as Gilbert Hernandez reminds us in Julio’s Day, the story of a man’s 100-year life that spans the 20th century.