At The New Yorker, Sam Thielman profiles Jim Woodring ahead of next week's Fantagraphics release, One Beautiful Spring Day.

Woodring seems to enjoy baiting the reader’s suspicion that he is compelled against his will to draw Frank, and this heightens the corresponding sense that the Unifactor somehow exists, whether or not it defies laws of physics and logic.

The Harvey Award nominations arrived this week (Comics Beat). At Panel Patter, Rachel provides a quick review of the second volume of the of Cat + Gamer which earned a Harvey nod for best manga. Also at Panel Oatter not technically from this week, but about a book that arrived this week is James Kaplan's review of Tom King and Elsa Charretier's Love Everlasting.

Charretier has an incredibly appealing style that's exaggerated in a "cartoonish" way, but never for the purpose of mocking the characters or just to be funny. No, everything that Charretier does in regard to character design feels rooted in the needs of the story.

With a healthy helping of magic realism the half a dozen tales here subtly weave in and out of each other, sometimes obviously, sometimes tangentially, to justify the term graphic novel over the description comics anthology. Each is self-contained but in the context of the overarching whole build up into something far greater than the sum of its parts.

I read comics in my school library. Stuff like the BONE collected paperbacks from Scholastic by Jeff Smith.

Oh man does that Bone comment make me feel old . . .

From the Paper of Record, Richard Sandomir remembers Mad Magazine cartoonist and acclaimed animator, Phil Coker. Actually from this past Saturday, but new to me is the fitting remembrance of Sid Jacobson by George Gustines also from the New York Times.

There’s one particular thread, the longest in the book, that reveals the nature of the life Wade is living, and results in a breaking-the-fourth-wall moment that acts as a playful reference to the reader, and finally lets you close the book. Scholars interested in the relationship between reader, text, agency, and interpretation will have a lot to pick apart here. Thankfully, Wylesol embeds these theoretically heavy moments with dark humor and visual playfulness.

There Does Seem To Be A Fair Amount of Media News . . .

IDW is bringing a bunch of Top Shelf Books and their latest Scott Snyder project to television. So, uh, how does that make you feel, Valiant? And is anyone else perplexed at the sheer volume of things Scott Snyder has published since he stepped back at DC? IDW seems to have perfected the old-fashioned Dark Horse model by balancing creator-owned properties with (a shrinking) line of licensed material. Kudos to IDW for shrugging off losing Marvel and Hasbro.

In other news, Vault is doing Kickstarters now, so that's a thing. Meanwhile, the second round of White Noise all stalled mid-run. It's hard to figure out exactly what is going on with that company. I wouldn't say Vault is too big for Kickstarters, but who am I to say? Anyway, they've partnered with Jazzlyn Stone for marketing and promotion. I don't know who that is, but she might have a blue tongue.

Dating back to last week, there were a few stories I wanted to comment upon that involved some industry (or industry-adjacent) shakeups. Heidi MacDonald is the best at sorting out all the press releases and announcements to clarify what the tangible impacts are and how potential changes will affect the greater comic community (Comics Beat). First up is whatever the hell is going on at Discovery Warner Bros. Beyond the fact that I can’t get over how someone could screw up running the second biggest media company on the planet, nor how said second biggest company needed rescuing from the far smaller Discovery, the company that seemed to be the employer for every other twenty-something I met who lived in Logan Circle in the mid-aughts, there seems to be a bevy of cost-cutting measures that have caused a nearly-completed $90 million movie to be shelled and have seemed to resuscitate the “DC will cease publishing periodicals” discourse.

While the Warner news is the bigger story for mass audiences, Heidi broke the news this week that Valiant will drop to one book per month, Deniz Camp and Jon-Davis Hunt's brutal Bloodshot Unleashed. This news follows the broader analysis of Valiant’s tenuous fate last week (Comics Beat and Heidi again).

I hold a very soft spot in my heart for Valiant because the company provided my first real gateway into collecting comics in the idyllic summer of 1994 when I was but an innocent twelve-year-old. Something about the relative newness of Valiant’s universe - more sprawling than anything Image would cook up, but far more contained than anything in the Big 2 - catalyzed the latent completer gene inside me. This was a young enough world that if I didn't necessarily get in at the exact origin, I could easily build a path there. I hadn't started at the beginning, but I could easily get back there - and I did with a few particular books: Solar, Harbinger, and H.A.R.D. Corps, at least. Why that mattered to me as a 12 year old, I don't know. But it did. I managed to continue to read Valiant, perhaps even more so, after the doomed Acclaim purchase when their issues started to hit the bargain bin at the local baseball card store that made a half-hearted attempt to get into the comic game in the early 90s. I never really connected with Valiant again in the same way, but what I've read, I've enjoyed. It seems perplexing to me that the same thing can happen to the same company twice. But then again, there are five Spawn books right now, so learning from history isn't exactly what we do in this hobby.

Years ago, Valiant employed a murderer's row of talented veterans and rising stars alike, and they still seem to be able to attract top talent. Heidi points out that, while the latest Archer and Armstrong series was canceled, there are still big plans in the new year for Valiant.

After this four issue series wraps up, BOOK OF SHADOWS returns in January, teaming up Shadowman, Eternal Warrior, Punk Mambo, Doctor Mirage and Persephone. It’s written by Cullen Bunn and with art by Vicente Cifuentes. X-O Manowar Unconquered, another mini from the A-list team  of Becky Cloonan, Michael W. Conrad and Liam Sharp follows that.

Cullen Bunn writes about 47 comics a month, and he has worked with Valiant in the past. The X-O team is an Eisner nomination waiting to happen. So, is the sky falling? I don't think Valiant has put out more than five tittles a month in years. Maybe they can operate bare bones? After 130 people (130 people work at Valiant?) lost their jobs, that's not comforting in the slightest.

But if this is a house of cards, what will the forecast for Valiant be? I doubt either of the Big 2 want anything to do with purchasing that IP, and I'm not particularly sure anyone smaller would have the finances to do it. I could see something like this being up Kirkman's alley. Licensed to BOOM!, Dynamite, or IDW? Would the Valiant characters be something that just wallows? As for me, I just wish I still had those Solar back issues. 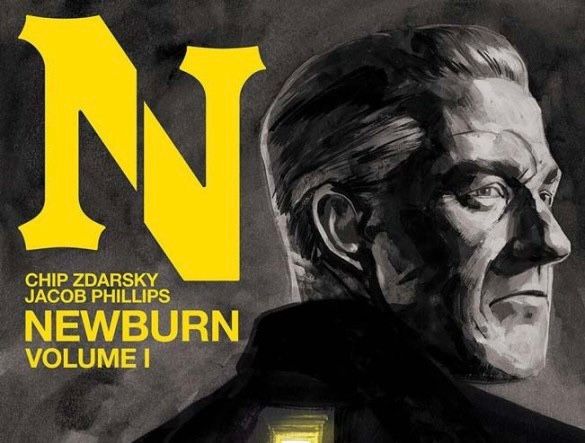 Chip Zdarsky and Jacob Phillips’ Newburn Volume One pulls at the private eye story, operating in the established noir rules but giving us a protagonist that may be an actual bad guy. 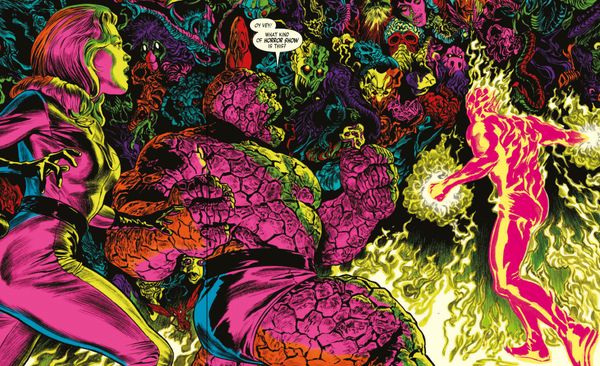 It’s like Alex Ross had a homework assignment— create your own Lee/Kirby Fantastic Four story.